The FAB Awards announces Jury Presidents for their 22nd Year 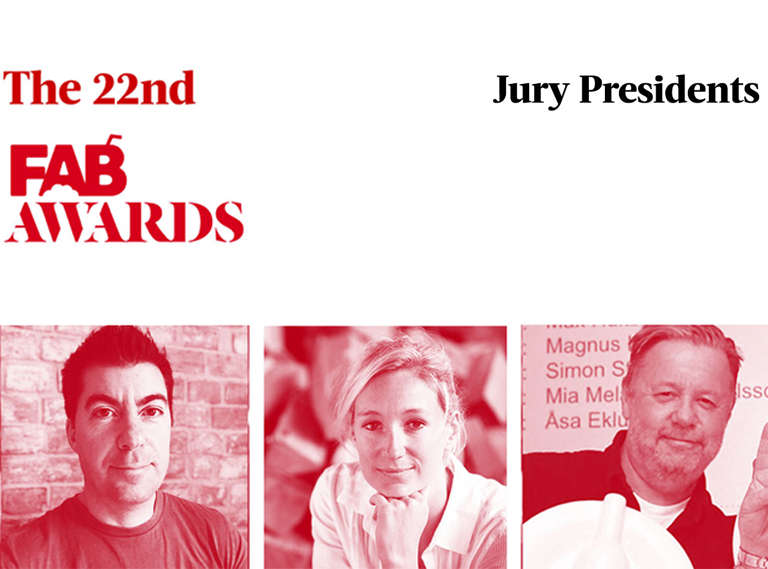 The FAB Awards – International Food and Beverage Creative and Effectiveness Awards – are pleased to announce the Jury Chairs for the 22nd edition of the awards.

The International awards programme that is focused entirely on work done for Food and Beverage brands, will be held on May 20, 2020 in London.

The awards, supported by Google UK and  YouTube once again this year, recognises the critical contribution that outstanding creative work makes to build brands, it identifies and rewards the leading practitioners from over 60 countries, and it acknowledges their contribution to their Clients and their Agencies.

Now in its 22nd year, The FAB Awards has taken entries from many Clients, every leading Agency Network, and many important Challenger Agencies, several Major and Challenger Brands from over 60 countries around the world.

Ranked the 7th best creative director in the world in The Big Won Report, Björn has been in advertising for 27 years. Eleven of those working for Lowe, in Stockholm and in London. The last 13 years he has been the ECD/CCO and a member of the board of INGO – an agency created by a world unique merger between Grey and Ogilvy. He is a member of both networks Global Creative Council. The agency has creatively gone from practically nowhere to win international acclaim: No 6 in Fast Company’s “Most innovative Companies in the world” 2017, He has been a juror of many prominent award shows including at FAB Previously and he has won some 150 awards, including Titanium and Grand Prix in Cannes, Several FAB and FABulous Awards and a Black Pencil.

The Packaging and Design jury will be led by Buddy Creative’s   Co-Founder and Creative Partner, Mark Girvan.

Mark is one of his generation’s outstanding designers, with years of varied experience at top brand and packaging agencies like Enterprise IG, Pearlfisher and Tutssels, and a shelfful of industry awards.

Some of the drinks industry’s biggest names, in particular, including Diageo, ThaiBev and SABMiller have raised a glass to Mark’s revitalising effect on their leading labels. In fact, if we could bottle his talent for reviving drinks brands, we could head for the beach, order a Blue Hawaiian and never come back. Buddy Creative have won Multiple FAB Awards over the past few years.

DesignLSM ‘s Managing Director, Holly Hallam returns for the second year in a row as a Juror and this time to head up the Interiors & Retail Environment jury.

Since joining the studio in 2015, Holly has driven and built up the studio’s offering and vast client portfolio. She has also been responsible for championing the DesignLSM brand, encouraging thought leadership and creativity through speaking and representing the company at key industry events such as Sleep & Eat, Independent Hotel Show, Revo and GRIF (Global Restaurant Investment Forum).

DesignLSM have won Multiple FAB Awards & A FABulous Award over the past few years at The FAB Show.

“Absolutely delighted to have Holly, Mark and Bjorn charing the various judging panels. Here at The FAB Awards we have always been privileged in having the highest calibre of judges giving their valuable time to us. We have every confidence that all three will lead their respective panel exceptionally and will continue to maintain the very high standards that The FAB Awards entails. Each of them are highly accomplished creatives in their own right and have won multiple FAB Awards in the past,” said N.Nayar, President of The FAB Awards and The FAB Forum.

The remaining judges on the various panels will be announced shortly. Entry submissions for The 22nd FAB Awards are now open with judging set to commence at the end of March.

Keeping in line with tradition The Awards will culminate in a grand ceremony at London’s exclusive The Hurlingham Club on May 20, 2020. The day before the Awards,  YouTube will co-host The FAB Forum, a thought leadership session, at their St. Giles High Street venue.

The Awards, along with branding experts Williams Murray Hamm (WMH), recently launched a fresh new identity ahead of The 22nd FAB Awards season.

FAB awarded WMH the brief without a pitch and asked the agency to create a new identity that would reflect the excellence and prestige of the awards, and make the brand feel fresh after having the same look since the 1990s. The identity also needed to work across other FAB properties, including FAB News and FAB Forum.

In response, WMH identified FAB’s brand truth of passion for what they do combined with originality, all delivered in an uncomplicated and unpretentious way, putting the fab into FAB. The new look builds on the wonderful world of food and beverage. Bringing all things ‘foody’ to the award and identity.

Garrick Hamm, Creative Partner at Williams Murray Hamm, said: “The old logo served FAB well, but after 20-plus years it was definitely time for a new look. Working with FAB we quickly saw that they needed an identity with bold personality that was just as fab as they are.”

N Nayar, Chairman of The FAB Awards, said: “We are absolutely delighted by Williams Murray Hamm’s genius. The simplicity and boldness of the new mark had us hooked the minute we saw it. Sitting perfectly across FAB News, Forum and Awards is truly excellent and hopefully reflects the creative excellence acknowledged here at FAB. We LOVE it and hope you do too.”

Traditionally held in May in London, The FAB Awards Ceremony has been attended over the years by Arla, Diageo, Mondelez International, Mars, McDonald’s, Heineken, Carlsberg, Coca Cola, Nestle, Pernod Ricard, PepsiCo and several other Brand owners and guardians.

The FAB Forum, which is an exclusive ‘invite only’ thought leadership session sponsored and hosted by Google at their St. Giles High Street Venue. All entrants of The FAB Awards are invited to The Forum which will be held the day before The Awards Show.

The deadline for entry submission for The 22nd Awards is March 7th 2020.